While having a chat about the old days, Baba's friends mention Sulu's name and this surprises Aai. 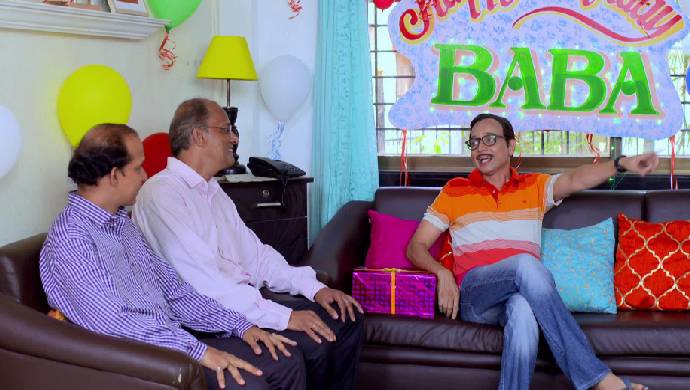 In the previous episode of Phulpakhru, Manas gets a call from Revati to inform him about the look test. She asks him to reach office for the same. In the afternoon, Sameer and Tanya come home to do the preparations and hint Aai and Atya to take Baba upstairs and keep him busy. At RBK, the shoot gets delayed and Manas is doubtful if he can make it to Baba’s birthday on time.

In tonight’s episode, Manas is unable to concentrate on his shoot because he is thinking about the preparations at home. A few moments later he gets a call from Vaidehi asking if he is done with his shoot. He tells her that the shoot has been delayed and he is unable to focus. The latter explains to him that work is equally important and he needs to focus on the shoot. Hearing this, Manas gets motivated and gets back to shoot.

Baba’s friends come home to wish him on his birthday. While having a chat they mention Sulu’s name, this surprises Aai. Seeing this Baba tries to change the topic by talking about other things. When Aai goes to the kitchen, he asks his friends to avoid Sulu’s name as that’s a controversial topic in the house. After successfully completing the shoot, Manas reaches home and while entering the house, Tanya says that finally, Revati allowed him to go home. Vaidehi tells Manas to ignore it and get ready. Sameer who has been controlling himself gets annoyed with Tanya.

Manas gets ready and tells Vaidehi that Sulu aunty will be reaching any moment now and they must be ready to see Baba’s reaction when she comes there. Sometime later, Tanya realises her mistake and goes to Sameer to apologise to him and he forgives her.

How will Baba react when he sees Sulu? Let us know your thoughts in the comments below.

Who Is Your Favourite Villian From Aamhi Doghi?

Phulpakhru 10 June 2019 Preview: Manas and Vaidehi Get Awkward In Front Of Baba's Friends