In tonight's episode, Sameer's advice to Revati to stop putting efforts to break the friendship between Manas and Sameer. 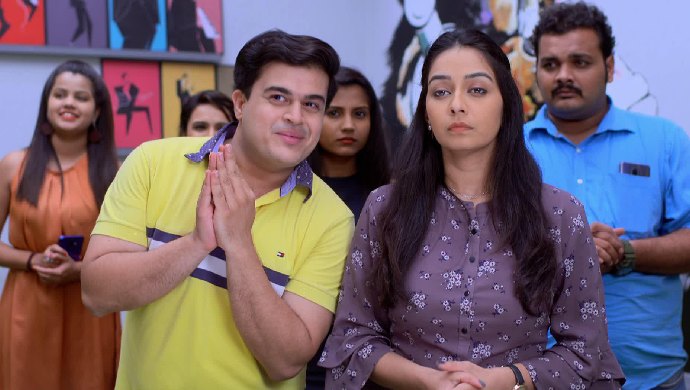 In the previous episode of Phulpakhru, Revati tells everyone that the competition is not over yet. She asks Manas and Sameer to compete against each other and announces that the one who loses the game will have to serve coffee to everyone. As the competition starts, Manas hints Sameer and intentionally pushes his tower of cups and lets Sameer win the competition. Later, Revati calls Kelkar and Jyoti inside her cabin and asks them what exactly happened during the competition. Kelkar reveals that Manas had indicated Sameer about his action and he saw it.

In tonight’s episode, Revati announces that since Sameer had joined RBK last, so he will do the Ganpati pooja. Sameer refuses to do so saying there is someone else who has joined after him. He then reminds everyone that Manas had resigned and joined again which is why he gets the honour of doing the pooja.

Later, Sameer notices that Revati is annoyed by his decision. He goes near her and gives advices that she should stop taking efforts to break their friendship or else she will keep failing. Vaidehi gets a call from Atya and she tells her that Aai’s health is better and they are on their way home. On the other hand, Gaurav meets a girl and brags about himself. He takes her to Manas and Vaidehi’s place to take Ganpati darshan. Vaidehi and Tanya get surprised to see a girl with Gaurav and call Manas to inform him about it. Manas gets excited and tells this to Sameer.

Later that day, Gaurav tells his friend that Manas and Sameer are his followers and they respect him a lot. Just then Sameer and Manas come home and after seeing them, Gaurav changes his statement.

Can You Guess This Gorgeous Actress From Phulpakhru?