Phulpakhru’s Sameer And Manas Had A Ball While Shooting For Yaariyan, Watch Video!

Put on your party hats and dance to the tune! 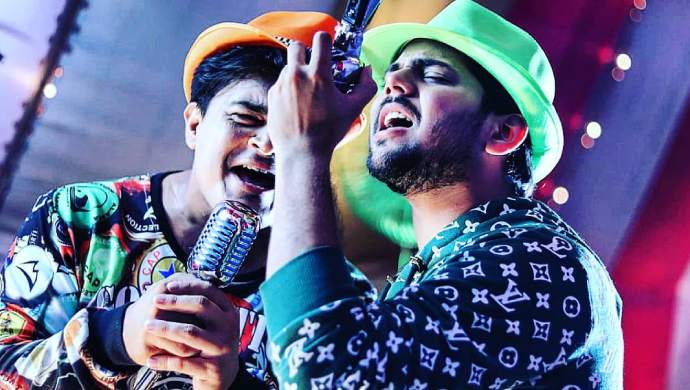 There is pretty much nothing better than seeing our favourite TV shows and songs come to life. We keep dreaming about the shooting process or the events that could have happened on the sets. During this, the best part comes when the actors share behind the scenes moments that are caught candidly on the camera. Our imagination literally merges with reality. Listening to our thoughts, the Phulpakhru actor Ashish Joshi shared glimpses from the sets of Phulpakhru clicked during the making of ‘Yaariyaan’.

Just like the other tunes of Phulpakhru, Yaariyaan arrived in the grandest way possible. This song remains special because it captures Ashish Joshi and Yashoman Apte’s voices while highlighting the friendship shared by their characters. We sung, danced and fell head over heels in love with the tune. Totally understanding our obsession and excitement with this song, Ashish revealed what exactly went behind building the vibrant and massive set of the song. Watch the video to find out!

It's befittingly called TEAMWORK ULTRACREATIONS!!! . A little behind-the-scenes of #yaariyaan … How a few shots were taken. The trolley, which is heavy, had me &/or @apt_yashomaan on it, adding to the weight by some margin, and it was being pulled and pushed along the length of around 20-25 feet by a team of 11 crew members, who ensured: 1. The trolley moved smoothly, so that we didn't feel the jerk… 2. The lights were correctly placed, so that we were seen properly… 3. The wires didn't come under the trolley or someone's feet, so that no one tripped on them… And they did it multiple times. . Some had climbed on the bamboo to ensure the rain didn't fall on the camera, but if it rained, it could be seen in the shot beautifully. . When I say that there is a team behind a scene or a shot coming out nicely, I mean it, and it just was more evident during this song shoot!!! . LOVE the team overall!!! . And that's why I LOVE WHAT I DO!!! Makes me feel really good when something that I do can also give joy to the crew members who work so hard for it!!! . This has been clicked by @yogclicks #ZeeYuva #zee5 #phulpakhru #sameer #samstyle #supersam #superteam #yaariyaan #behindthescenes #bts #making

Ashish credited the entire crew of Phulpakhru for taking utmost care while shooting for the song during the monsoons. Now, each time when we hear it, we will remember the hard work and the sweat that really went in turning this dream into reality.

What do you think about the song? Have you replayed it just as much as us? We would love to know your thoughts in the comments below.