Aalap and Jui were forced to fight goons when they were waiting at a tea stall. 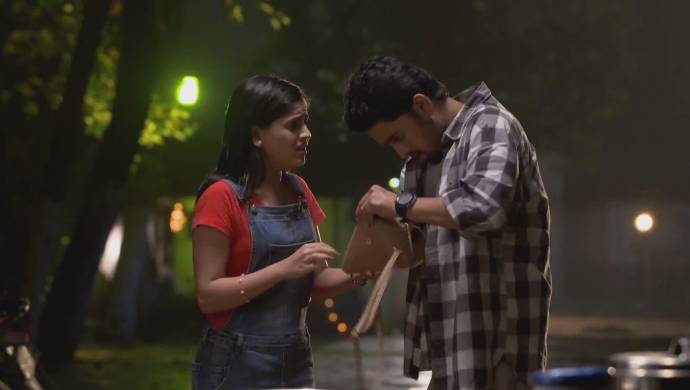 Aalap and Jui’s relationship in Prem Poison Panga is on an all-time high after receiving approval from their families. The couple has been finding ways to spend more time with each other, before the arrival of their d-day. Recently, when Jui and Aalap went out on a date, he gifted her a snow globe, which she thought was a very romantic move by him. Following this, the couple visited a tea stall, and little did they know that trouble was awaiting them. Just as Aalap and Jui were about to place their order, a couple of goons tried to manhandle them. We wonder if Aalap and Jui will be able to protect themselves from these bad men.

Aalap and Jui were having a great time until they arrived at the tea stall. Upon seeing the couple there, a bunch of goons interfered and picked a fight with Aalap to beat him up. They initially tried to provoke him, and when that didn’t work, one of the goons broke the glass jar residing on the panel of the tea stall. Then, they poked Aalap on the chest which made the latter, slap one of the goons. Seeing this, another goon called more of his friends and they surrounded Aalap and Jui. They beat up Aalap, as Jui just stood there, staring helplessly. We wonder if Jui will use her powers and transform into a snake. This could scare these men and save Aalap from being injured badly.

Since the area where the couple is at,  is isolated, there aren’t many passersby that can come to Jui and Aalap’s rescue. So what will happen next? Stay tuned! Until then, tell us in the comments if you think Jui and Aalap will reach home safely.

Phulpakhru 10 April 2019 Preview: Sameer And Tanya Join The Reges For A Special…