Aalap's mother Malti found out that Mr Bhole has tampered with falsified Jui's horoscope. We wonder if she will forgive him for this. 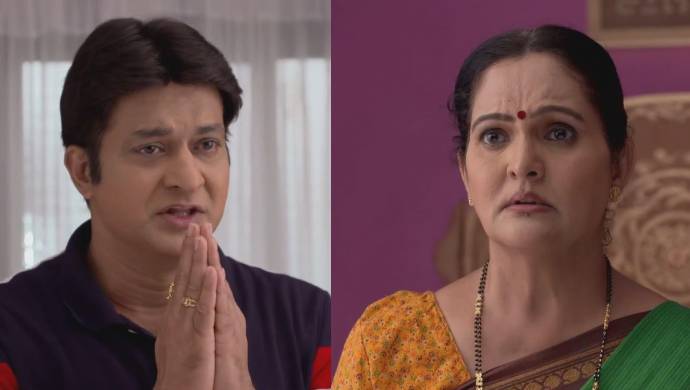 In the recent episode of Prem Poison Panga, Jui’s father attempted to lie to Aalap’s family about her Jui’s patrika. He made Jui’s false horoscope in order to align her stars with Aalap’s. However, the secret was discovered found out by Aalap’s family, after Prajakta and Aalap’s mother, Malti, came to know about it. The latter, who was initially happy to get an astrologer’s approval for on Aalap and Jui’s union, got became upset. She obviously humiliated Jui’s family for lying to her them. and attempting to falsify Jui’s information. Hearing Aalap’s mother’s outburst, Mr Bhole apologised for pulling off this stunt. Do you think he should be forgiven?

Ganghar spotted Jui’s father, while the latter was tampering with his daughter’s s details on the patrika. He updated Aalap about the same, but their conversation was unfortunately overheard, by Prajakta. She spoke to Malti about it, and the latter’s trust in Jui’s family, was broken. Malti went to Jui’s house, and told her family about the repercussions of their actions. Even though Jui tried to make amends, Malti didn’t listen. She said that by lying to them, Aalap’s family has made a huge mistake. Jui’s father immediately took the blame on himself and explained why he tampered with his daughter’s horoscope. He explained  that Jui and Aalap’s relationship is unique, and in order to keep it strong, he was forced to lie to Aalap’s family.

Although we understand Mr Bhole’s perspective, we do not approve of him lying to Aalap’s family. We hope Malti forgives Mr Bhole and accepts Jui wholeheartedly again. Until then, we would love to know whose side are you on? Tell us your thoughts in the comments below.