Saajana Family’s Picture Perfect Beats All The Bad Times Going On In The Show!

The actors of the show went for dinner together after wrapping up with their hectic shooting schedule. 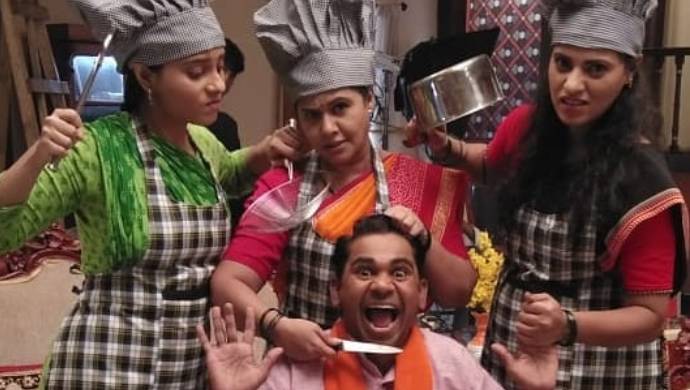 Nothing is going right in the Marathi serial Saajana at the moment. Rama and Pratap, who were supposed to get married, have postponed their engagement after Suman’s death in an accident. This happened on the day of their engagement when Suman was reaching the venue. This news completely shattered her family and as a result, they were left shaken. It was hard to witness Suman’s mother Sarla, who could barely control her emotions after knowing the news of her daughter’s death. However, no matter how stressful their reel lives get, the cast of Saajana doesn’t let it affect their real lives. They, especially, love to spend time with each other after their hectic schedule. Have a look!

The actors of Saajana have become like a tight-knit family after spending months of shooting alongside each other. They love indulging in team activities and doing dinner parties when the camera is not rolling. Recently, Pradnya Jawle Edke, who essays Aaisaheb’s character, posted a picture with her co-stars as they were enjoying their mocktails together. In this photo, you get a glimpse of these artists in their raw form without any makeup or costume. We were especially amused to see the actress Shubhangi Sadavarte, who portrays Suman’s character. While in reel life, Shubhangi is seen being vile to everyone around her but in real life, she is a total sweetheart!

The only person missing in this get-together was Abhijeet Shwetchandra who plays the lead, Pratap’s role. Had he been there, it would be a full house. After seeing this glimpse, we are impatiently waiting for more such pictures to come our way! Are you loving these good times as much as us? Let us know your thoughts in the comments below.

These Pictures Of Siddharth Bodke On The Bike Are To Die For!

Exclusive: Ashish Joshi Reveals Who His Closest Friends Are From The Phulpakhru Family