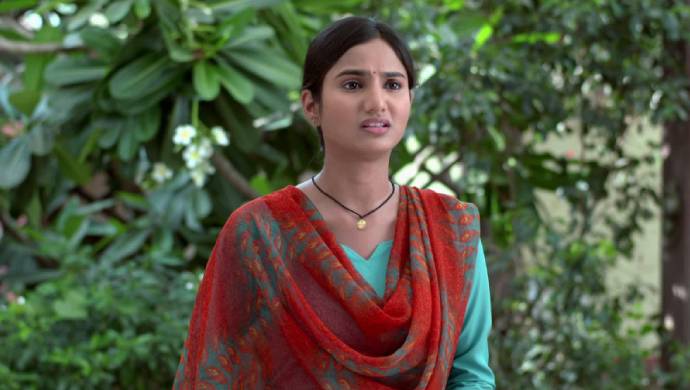 Last week on Saajana, Rajkumar is purposely sent outside the village by Ankush so that he will miss his sister’s wedding. Ankush tells lies to Rajkumar about parents and Rama. He is shocked after hearing Ankush’s accusations against Rama. Ankush keeps boasting about himself in front of Rajkumar. On the other hand, Rama comes home early from Pratap’s place as she isn’t feeling well. Mami and Mami are discussing their dire financial situation.

Mami decides to ask Baisaheb about another job along with cooking in their house. Rama supports Mami as the latter feels good. Meanwhile, Ankush and his people gang up against Rajkumar and bully him for not being invited for Suman’s wedding. He confronts Ankush for trying to help Suman run away from the house. Rajkumar says Ankush betrayed his trust as the latter retaliates by beating him up.

The following day in the morning, Pratap compliments Rama for the freshness that radiating from her face. Meanwhile, Mama and Mami are happy that Suman has been married off. As they are discussing this, Suman enters and starts creating a scene. She starts screaming and demanding new sarees from them. She also wants a smartphone as Mami tells her about their financial condition.

At night, Rama hasn’t come home as Mama and Rajkumar go to look for her at Baisaheb’s place. Meanwhile, Pratap’s servant keeps Teju’s lost bracelet in Rama’s bag and she is accused of stealing. She starts crying as Baisaheb screams at Rama for taking advantage of their niceness. Rama doesn’t know what to say in her defence, consequently, she is fired. Teju tells the fiasco to Pratap who doesn’t believe that Rama has stolen anything. Even Mama and Mami are looking for her and they start panicking.

Pratap finds Rama sleeping on the staircase of a temple. She explains to him that she isn’t a robber as Pratap promises her that he will prove her not guilty. Meanwhile, Rajkumar starts fighting with Pratap and accusing him meaninglessly.  From him, Pratap comes to know that someone from his household is giving news to Ankush.

For more entertainment, check out the latest episodes of your favourite Marathi TV serials streaming free on ZEE5.