Saajana Weekly Update: Rama And Pratap Confess Their Love To Each Other

In Saajana, after taking her time, Rama says those three words to Pratap. 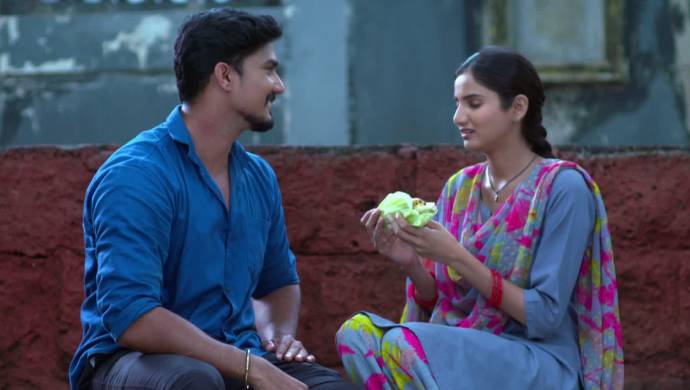 Last week on Saajana, Pratap is waiting for Rama to meet him. She comes as promised. The next day, Suman notices the changes in Rama’s behaviour and she warns Mami about it. She realises Rama is looking at herself for a longer time and blushing on her own. Rama goes to work and Teju compliments her for looking different. Then, Pratap secretly asks Rama if she read his letter. She just blushes and goes to the kitchen and starts working.

Pratap follows Rama to the kitchen and they have a long eye-contact in Manju’s presence. They both secretly try to convey a message to each other as Manju has turned her back towards him. He calls her to meet him in the evening. As decided, Rama and Pratap meet and she feeds Pratap bhutta. They promise to talk through eyes instead of using words. Then, Rama sits on his bike and holds him on his shoulder.

They both go to the temple and pray to the goddess for fulfilling their wishes. Pratap tells that Rama is his whole world. Everything that is his belongs to Rama. He promises the goddess to give Rama all the happiness and protect her against everyone. While Rama says she can’t think of anyone apart from Pratap. She loves Pratap the way he has never been loved. She prays to the goddess to protect them against the hurdles.

The next day in the morning, Pratap isn’t at home and Rama gets worried. While she is in the kitchen, Manju confronts her. She has seen Rama and Pratap in the temple. So, Manju tries her best to warn Rama about Raosaheb’s reaction. Rama hopes that they will overcome all the difficulties in their path and fulfil their dream.

What do you think will happen in the upcoming week? We would love to know your thoughts in the comments below.

Almost Sufal Sampoorna: Are Sai And Nachiket Falling In Love With Each Other?