In Saajana, Rama finds the letter sent by Ankush to Suman. She makes Suman realise the consequences of her actions. 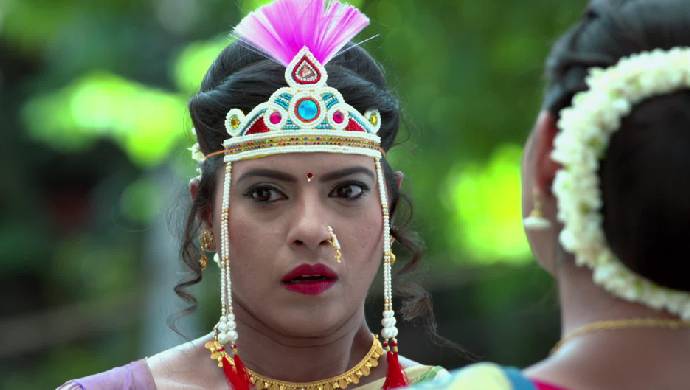 In Saajana, Ankush is angry at Rama for humiliating him as he promises to avenge this. Meanwhile, after Sarla Mavshi and Rama plead to Baisaheb to get Suman married. The latter readily agrees and generously wants to help them. Then, Rama starts working in the kitchen, Pratap enters the kitchen and talks to her as they both share a romantic moment. That evening, while Rama is going home, Ankush stops her and tries to bully Rama but she doesn’t entertain him.

After Rama reaches home, Suman starts fighting with her. She is tired of the comparison her parents make to Rama and wants the latter to get out of the house. Mama and Mami try to intervene, but Rama stops them and says that she doesn’t care what Suman thinks about her. Rama threatens her that she won’t tolerate Suman speaking ill about Mama and Mami as they are like her own parents. The same night, Suman’s another attempt to run away is caught by her family members.

Mami starts shouting at her and has a nervous breakdown. She is crying as Mama is too stunned to talk. The following day at work, Pratap tells Rama that his friend is ready to get married to Suman even tomorrow. Suman throws tantrums after hearing this as Rama and Chingi go with her for shopping. While they are in the market, Ankush stops them and sarcastically asks them about the marriage preparations.

As Pratap comes home with his shirt stained in haldi from Rama’s house, Baisaheb asks him to draw a line when it comes to mixing with the people from lower castes. Pratap nods and still keeps thinking about the time when Rama stained his shirt. He can’t stop blushing. On the other hand, at Suman’s place, the haldi preparations have started. During this, Ankush sneakily sends a letter to Suman. The message reads, that he will help her become an actress. It is her choice to get married or run away again, this time, with his help.

The next morning, Rama finds this message and makes Suman realise the consequences of her actions. Suman, then, cancels to run away and walks to the pandal.