Saajana: Will Rama Be Disappointed In Sarla?

In Rama's absence, Sarla let Suman try the necklace and the latter broke it. We wonder how Rama will react to Sarla and Suman's carelessness. 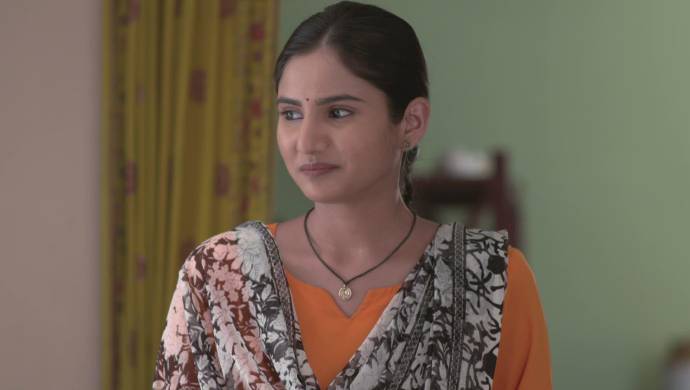 In the recent episode of Saajana, we saw Suman break Rama’s necklace which was gifted to her by Aaisaheb. This incident happened in Rama’s absence when Suman, against Sarla’s protests, decided to try on the jewellery. In her haste to wear the necklace, Suman broke pendant in pieces. Seeing this, Sarla panicked but Suman promised her to fix it before Rama comes to know. The ladies kept the necklace in a trunk. After Rama returned home, she asked for the antique jewellery, but it was missing from the trunk. Do you think Rama will be disappointed in Sarla?

Previously, Suman has been reckless with the things she used. When she got to know that Aaisaheb had given Rama the Jadhav family’s antique jewellery, she became greedy. She wore the necklace, even before Rama could put it on, and spoilt it. Then, Sarla and Suman kept the necklace in the trunk. However, when Rama came home and checked the trunk, the expensive antique piece wasn’t there. Presently, we know Suman must have taken it, but we don’t understand her purpose of stealing. Knowing Suman’s attraction towards materialistic things, she is capable of selling the necklace for money. But, in this situation, it is Rama and Sarla who have to face the consequences of Suman’s action. This could possibly create a misunderstanding between Rama and Sarla since the latter allowed Suman to even touch the jewellery in the first place.

We can’t wait to watch how Rama resolves this situation without Pratap’s parents coming to know about it. Will Pratap be able to help her locate the missing jewellery? Let us know your thoughts in the comments below.

Almost Sufal Sampoorna: How Well Do You Know Nachiket?