Saajana: Will Sarla Tell The Truth About The Necklace To Rama?

Suman broke Rama's necklace which was given to her by Pratap's family. We wonder if Sarla will protect her daughter or tell Rama the truth. 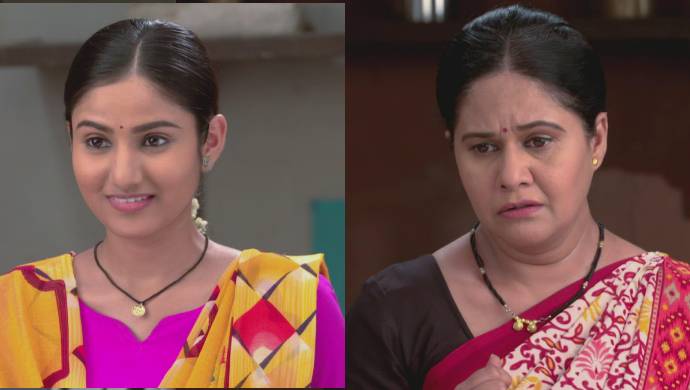 Earlier, we wrote about the trouble which Suman is bound to cause in Rama and Pratap’s wedding in Saajana. Our prediction has, unfortunately, come true as Suman did complicate things in Rama’s absence. She spoilt an expensive necklace, which is Jadhav family’s heirloom when Rama had gone to meet Pratap. Suman’s mother, Sarla came to know about this reprimanded Suman who promised to get it fixed before Rama and Pratap’s big day. Later, after Rama returned, she asked Sarla for the necklace but latter didn’t know what to say. Do you think Sarla will be able to tell the truth to Rama?

Suman has always been the greedy and the jealous one in Rama’s family. In the past, she was competitive and wanted the limelight which Rama got. Recently, after Rama and Pratap’s wedding was confirmed, Aaisaheb gave Rama an antique necklace which the latter was supposed to wear during the engagement. However, Suman pressured Sarla to show her the necklace since she wanted to try it on. In her haste, Suman accidentally broke the jewellery and wasn’t sorry for it. Sarla got tensed knowing the importance of the necklace but Suman promised her that she will fix it before Rama knows of it. Later, after Rama came home, she asked for the necklace since Pratap asked her to try it on and send her a picture. We want Sarla to tell the truth to Rama since Suman can’t be trusted. At least, Sarla and Rama can handle the situation together without relying upon Suman.

We hope Aaisaheb and Raosaheb don’t come to know about this as they will lose their faith Rama’s family. Already Raosaheb reluctantly agreed to marry Rama to Pratap, he shouldn’t have to reconsider his decision because of Suman’s mistake. In the meantime, we would love to know your thoughts on Suman’s behaviour. Tell us in the comments below.

Almost Sufal Sampoorna: How Well Do You Know Nachiket?