These 5 Celebrity Couples Prove Age Is Just A Number

From Sachin Pilgaonkar to Siddharth Chandekar, these actors show, age doesn't come in between romance. 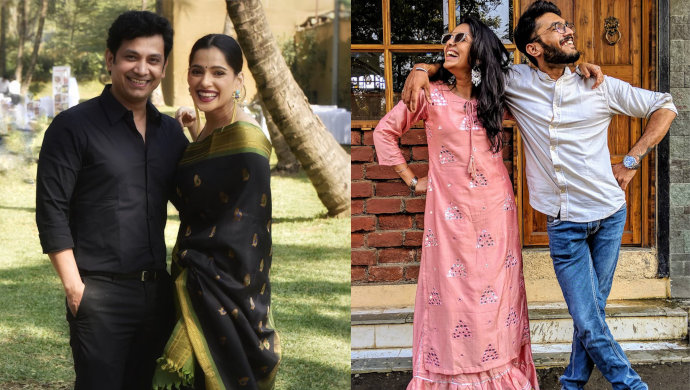 Isha Nimkar (Gayatri Datar) and Vikrant Saranjame (Subodh Bhave) from Tula Pahate Re don’t let their age difference come in between the relationship. But they aren’t the only ones who have defied this carnal rule of the age difference. We have some real-life couples who show us, it’s a mutual understanding that goes a long way.

After falling in love on the sets of Navri Mile Navryala, their 11-year-age gap didn’t matter. Funnily, Supriya was under the impression Sachin was already married, but he was quick to clear that misunderstanding. They sealed the deal when Supriya was only 17.

Even the chocolate boy of the industry needs a better half. This young couple (with a five-year gap) started dating in September 2017. Recently, after a year of being together, the Gulabjaam actor, Siddharth Chandekar popped the question and made Mitali (seen in Freshers on Zee5) the happiest.

Both being industry’s established actors, the two are extensively known for their work in Ajab Lagnaachi Gajab Gosht and Vazandar on Zee5. Given their onscreen bond, Priya and Umesh understand each other’s temperaments easily. Maybe one of the reasons why their marriage is so successful without the eight-year gap coming in between.

Ashok Saraf has worked in hits films including, Balirajacha Rajya Yeu De and Pakda Pakdi. Although Ashok is 18 years senior to Nivedita, their chemistry worked excellently on and off screen.

V Shantaram is a legend in his own right as there is no comparison to his boundless contribution to the film industry. Sandhya and Shantaram met at the casting of Amar Bhoopali (1951) where he was floored by her voice. Later, they went on to do a film together, Do Ankhen Barah Haath.

Do you think we missed out on any couple in the list? Do let us know in the comments below!

Also, if you haven’t watched Gulabjaam yet, check it out streaming on ZEE5.

Ever Wonder What Convinced Bhau Kadam To Take Up Liftman?