These Pictures From The Sets Of Saajana Will Make Your Day A Whole Lot Better!

We see the Jadhav family have fun and cracking jokes as the camera clicks them. 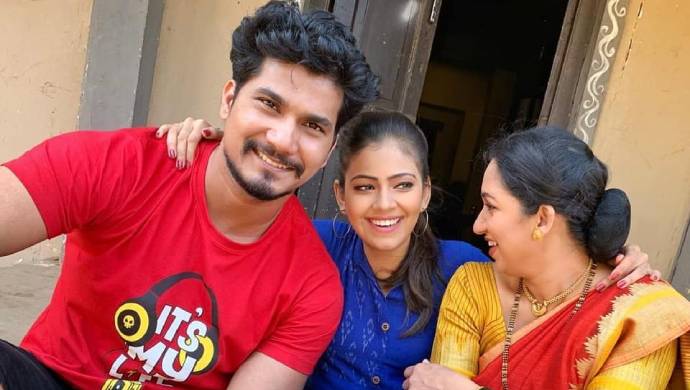 We have thoroughly enjoyed watching the entertaining love story of Rama and Pratap in Saajana. We stayed by the lead couple who had to face some tough situation due to Raosaheb’s anger. However, even in those circumstances, Pratap never gave up on Rama and fought with his father. Following this, Rama and Pratap broke up which led to him reconcile with his family. Since then, Pratap has made amends with his father, Raosaheb and grown closer to his Aaisaheb and Teju. Recently, Pradnya Edke, who essays Aaisaheb’s character, posted pictures with her onscreen family. Through them, we could see Rama’s noticeable absence as the Jadhavs enjoyed some family time. Have a look!

We always love to see behind the scene pictures of the stars of our favourite serial. So, when Pradnya posted a series of photos, we knew we were in for a surprise. Like, in this, we can see Abhijeet Shwetchandra, who plays Pratap, and Pradnya are enjoying clicking selfies.

It is a rare sight to see Raosaheb smiling as he always has a stern expression on his face in Saajana. The actor, Abhijeet Chavan is loving the ‘me-time’ in between the shots. Alongside, Pradnya, this onscreen jodi looks like a power couple, don’t they?

The cast of Saajana never holds back from posting glimpses of the fun they have on the sets of the show. In this picture, we can see Saaniya Chaudhari, who essays Teju’s character, trying to control her laughter as the camera takes her candid shots.

Even though currently in Saajana, the atmosphere may be tensed as Pratap has decided to get married, the actors are having the best time of their life. We guess it is their real-life bond which is helping them establish chemistry in front of the camera. Although next time, we hope to see Pooja Birari in these photos too. Until then, let us know your thoughts on this serial in the comments below.

For more entertainment, watch the popular Marathi serials and the latest movies streaming on ZEE5.