The actress, who essayed Manva's character in the Marathi serial, wore little to no makeup as she posted a series of pictures. 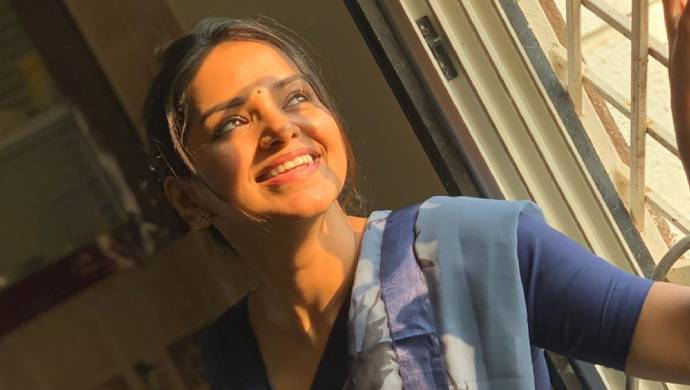 We miss watching Titeeksha Tawde in Manva’s character on Tu Ashi Jawali Raha. The actress stole the show with her phenomenal acting skills and dress sense. We also crushed on the chemistry which she shared with her co-star, Siddharth Bodke. Now as the show has gone off-air (but continues streaming on ZEE5), we still religiously love stalking her account on social media platforms. We noticed that just like her onscreen character, Titeeksha is just as fashionable in real life. Recently, she posted of herself in a saree boasting a sunkissed look. Here’s everything you need to know about it.

The Tu Ashi Jawali Raha actress is mostly seen embracing Indian clothes in daily life. This time too Titeeksha wore a blue silk saree while she stood close to a window. She smiled widely as the sunlight fell on her face and she brimmed with positivity. In the pictures, Titeeksha barely has any makeup on her face. Since, in front of the camera, she is always wearing full-face makeup, these photos looked were a delight to her fans who got a candid look at her. In the caption, she complimented how saree is an important part of Indian life. Check out the picture below.

We can’t wait to see Titeeksha in newer projects soon. In Tu Ashi Jawali Raha, since her bonding with Siddharth was such a hit within her fans, we hope the actors are cast together again! Are you a fan of Titeeksha just like us? Let us know your thoughts in the comments below.