In Tu Ashi Jawali Raha, Rajveer doesn't like that Manva broke her promise to him and spoke to her family at the hospital. 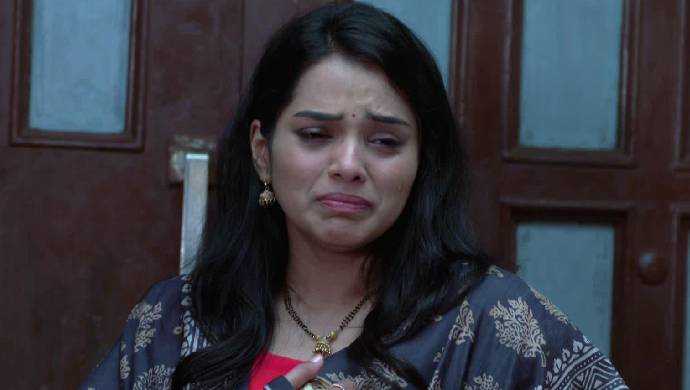 This week on Tu Ashi Jawali Raha, Manva is at the hospital with her family. During their waiting period, the doctor tells them that the operation on Col. Ajay is successful. Manva is relieved after hearing this news and she goes back home to get tiffin for everyone. On reaching back home, Manva starts crying in front of Aai. Kaka and Kaku come to her while pretending to care about Manva’s father. They indirectly insinuate that Manva is responsible for her father’s heart attack.

Sakhi calls Manva asking her to visit her father. She tells Sakhi that she can’t come due to Rajveer’s pressure. But Sakhi insists Manva meet Col. Ajay as he is asking for her. Manva gets ready to go however Rajveer tries to stop her since her foot is bleeding. Manva pleads to Rajveer but he doesn’t give in to her demands. Meanwhile, at the hospital, Nitish is angry at Manva for ignoring their parents. Kaka goes to meet Col. Ajay at the hospital. He tries to instigate Manva’s mother against Manva. When Manva’s mother asks about her condition to Kaka, he says that she is resting at home. This makes Nitish angrier while Manava’s mother gets sad.

The following day, after Manva goes to the hospital, Rajveer’s spy tells him about Manva’s conversation with her family. Rajveer refuses from going to the hospital stating he doesn’t have the time. Finally, Kaka has to take Mai to the hospital. Manva, who is also at the hospital, refuses to meet them in the fear. Manva instead asks Sakhi to cover up for her.

After Manva returns, Rajveer accuses her of being a liar. He says that Manva broke her promise and spoke to her family. Manva tries to justify her stand but Rajveer doesn’t give her a chance. He punishes Manva by throwing her out of the house. She collapses and everyone in the house panics. They call the doctor as Manva is down with high fever.

On the other hand, Col. Ajay’s condition is bettering and he is to be discharged the following day. He is deeply hurt thinking Manva has abandoned him during this crucial time. Meanwhile, after recovering, Manva controls her desire to meet her family. Mai asks everyone in the house to look after Manva. Following this, Rajveer announces that he is taking Manva out on a vacation. Immediately, Kaka understands Rajveer’s real intention of keeping Manva away from her family.

Col. Ajay comes home and he is welcomed heartily. Sakhi tries to cheer him up and he is thankful for all that they have done. During this conversation, Manva’s absence is deeply felt. What do you think will happen in the upcoming week? Let us know know your thoughts in the comments below.

For more entertainment, check out the latest episodes of your favourite Marathi TV shows streaming free on ZEE5.

If You're Looking For More Drama, Read What Alaknanda Has To Say About Manva!

Saajana Weekly Update: Pratap To Get Married To Adhya?