In Tu Ashi Jawali Raha, Manva calls the meeting of all the villagers and reminds them of the work Col. Ajay has done in the past. 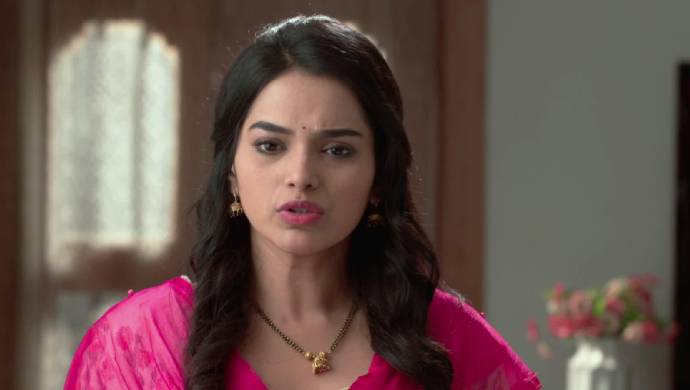 In Tu Ashi Jawali Raha, as asked by Rajveer, Jadhav blames the robbery of jewels on Colonel. While Rajveer and Manva reach, Col. Ajay justifies that he was in the temple till late in the night, but he is innocent. However, nobody believes him and the cops are called. Col. Ajay looks at Rajveer, who is the trustee, for support but the latter doubts Colonel instead. Understanding Rajveer’s motive, Colonel asks Jadhav if someone (hinting at Rajveer) is instigating him to do this. Rajveer gets to know this and eyes at Colonel. Hearing this, Jadhav and everyone else asks Colonel to apologise to Rajveer.

Manva’s father, then, reveals that Rajveer was behind shutting toward her school. Manva doesn’t believe him and questions her own father. After her father is arrested, Manva asks Rajveer’s permission to let her stay at her parents’ place, but he gets angry on her. Mai supports Manva’s suggestion as Rajveer provokes his mother against Colonel. After he says Manva’s father humiliated him, Mai decides to meet Manva’s mother the next day.

Nitish tries to get Baba out of the jail but he can’t. Aai can’t stop crying as Baba has worked for the welfare of the village. Manva and Nitish try to placate her, but she is worried about Baba’s condition in jail. The following day, Jadhav goes to meet Rajveer and congratulates him for arresting Manva’s father. Jadhav is slightly worried if the police investigate this matter further, they both could get into trouble. But Rajveer has a plan to handle the cops. They also want to keep Baba in jails for a couple of days more.

The following day, Rajveer fights with Manva’s family as Mai is disappointed in his behaviour. Meanwhile, Manva’s mother coaxes her into going to meet Rajveer because Aai feels guilty after Baba’s allegations on their son-in-law. After much persuasion, Manva agrees to go to Rajveer’s place. Manva reaches her in-law’s place and starts crying as Mai tries to console her. On the other hand, she collects all the villagers and makes them realise how much her father has worked for the village. She tells the villagers that Col. Ajay is innocent as Jadhav sees this and reports it to Rajveer.

Yuvotsav 2019: 5 Groundbreaking Moments You Shouldn't Miss Out On