In Tu Ashi Jawali Raha, Rajveer makes a deal with Manva which stops her for meeting her loved ones. 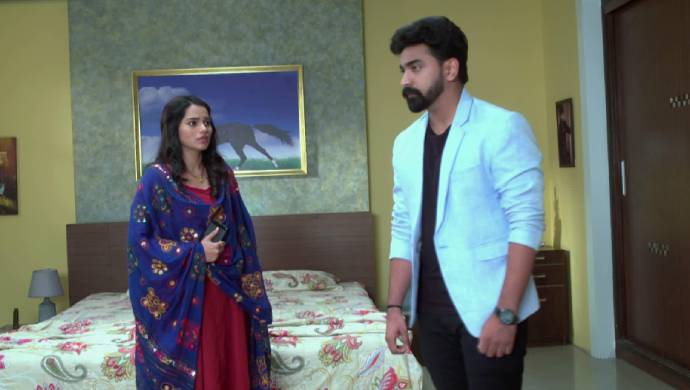 Last week on Tu Ashi Jawali Raha, Manva and her family go to meet her father and hear the court proceedings. But, as they are heading out Nitish asks his mother and Manva to wait at home. Meanwhile, Kaka, who is also heading for Col. Ajay’s court hearing, wants to see if the latter gets the bail. Rajveer makes a phone call to ensure that Manva’s father doesn’t come out on bail.

Manva asks Rajveer’s help to gain her father’s freedom. However, instead of being empathetic, Rajveer puts conditions on Manva before lending a helping hand. A desperate Manva promises to accept the conditions laid  by Rajveer even before hearing him out. The first condition is Manva shouldn’t reveal he is behind Baba’s freedom. Secondly, after he is out of jail, Manva shouldn’t be in touch with her family. This is Rajveer’s way of avenging his humiliation by Col. Ajay. He traps Manva who is too shocked to say convince otherwise.

Manva asks Nitish to accept the bail by this ‘mysterious’ person. Nitish and Baba have an emotional meeting in jail as the latter is left out on bail. At night, Manva’s family insist her to stay there to celebrate but she is reluctant fearing Rajveer. She stays there thinking this will be her last night in the house as she decides to enjoy it there. Meanwhile, Rajveer is waiting for Manva at home impatiently. He comes to pick her up from home. She is depressed to not be able to meet her family henceforth. Rajveer tries to convince her that her family is toxic.

The next day in the morning, Kaka urges Manva to call at home as Rajveer overhears this conversation from behind. Manva sees him and tries to refuse Kaka. But, Kaka gives Manva his phone as she is tempted to talk to her parents but Rajveer calls her name from behind.

For more entertainment, check out your favourite Marathi shows streaming free on ZEE5.

Phulpakhru: Do You Think Revati Prefers Manas Over Everyone?