In Tu Ashi Jawali Raha, Rajveer wants to isolate Manva and distance her from her family. 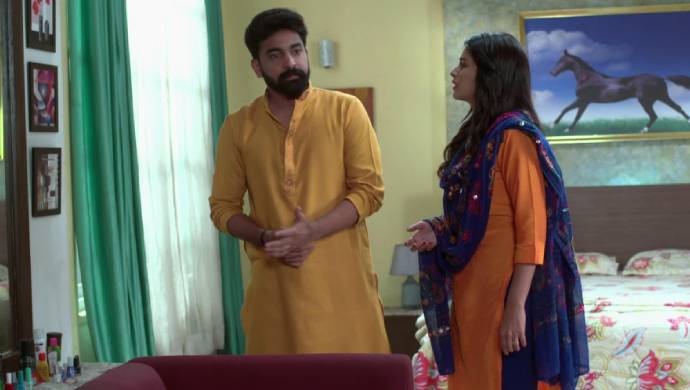 In Tu Ashi Jawali Raha’s recent week, Manva is not talking properly to her parents after her fight with Nitish. She tells her mother that Nitish didn’t go to apologise to Rajveer, he rather wanted to insult the latter. Manva thinks Nitish is seeing Rajveer as his competitor, hence he is trying to put him down in the business. She sees Nitish hold Rajveer’s collar in the cabin which angers her as she tries to slap him. Manva’s mother tries to defend Nitish but she isn’t a state of mind to listen to her.

At office, Rajveer is happy that Manva witnessed the scene between him and Nitish. He says whoever tries to humiliate him, be it Manva’s parents or her brother, he won’t hesitate to distance them from her. Rajveer wants Manva to himself and wants to isolate her from her loved ones. In the evening, Manva asks Rajveer the exact turn of events that led Nitish to hold his collar. He doesn’t answer this question. Meanwhile, Nitish is baffled after his sister raised her hand at him. She didn’t give him a chance to justify himself even after they have grown up together. Although Baba tries to calm him, he is too hurt, to begin with. Nitish says Rajveer is two-sided as Baba is shocked to hear this accusation.

The following day, they go to Manva’s place to resolve the matter, but Nitish walks out of there seeing his parents apologise to Rajveer for no reason. He thinks Manva wants to stroke her husband’s ego than value her parents. On the other hand, Kaka and Kaku are happy there is a rift created between Manva and her parents. Kaka is sure that Rajveer will emotionally blackmail and trap Manva which will be followed by him creating a scene. Nitish is worried that he has behaved badly with Manva as he consults Sushmita about it. She supports his behaviour while provoking him more against his family.

Kaka goes to meet Manva’s parents as Nitish enters and creates a scene in front of him. He is too angry at Manva’s behaviour to forgive her. Meanwhile, Baba suspects Manva’s unusual behaviour. Kaka takes the opportunity of this situation and instigates Rajveer against Manva. After Manva and Rajveer talk, he tries to turn her against Nitish.

For more entertainment, check out Saajana streaming free on ZEE5.