Sadhana and Rajveer's estranged relationship threatens to destroy Manva's marriage with Rajveer. What will Manva do in this scenario? 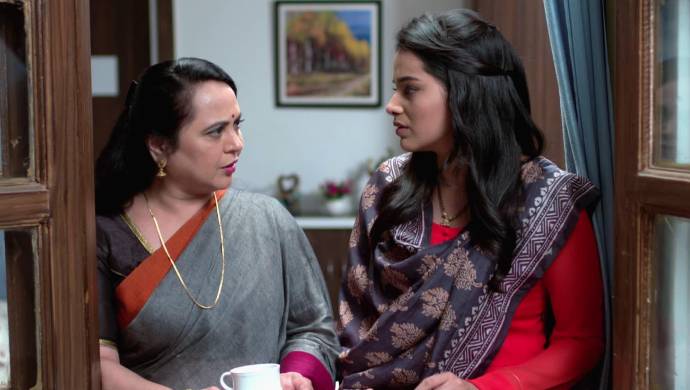 Ask anyone who watches Tu Ashi Jawali Raha, they will tell you that Manva’s cleverness helps in keeping Rajveer from falling apart. Manva and Rajveer’s separation led to the latter’s downfall personally and professionally. However, now as they are slowly reconciling with each other, there is yet another complication which threatens their relationship. It turned out that Manva’s landlady, Sadhana, is Rajveer’s estranged mother. Rajveer and Sadhana separated when he was a child. Now, as Sadhana has returned to Rajveer’s life, he isn’t ready to accept her. We wonder will Manva will help the mother and son come together?

We have been highly excited for Manva and Rajveer’s reunion after the huge fight between them. But, as they resolved their differences, the Marathi serial had a huge twist awaiting them. This twist was the entry of Rajveer’s mother in the picture. Sadhana, who is Manva’s landlady is Rajveer’s mother who separated from him due to some circumstances when he was young. This move had a huge impact on Rajveer’s growing-up years and has created anger towards Sadhana. Now, Rajveer, who is unwilling to accept Sadhana, humiliated her after Manva told him about his relationship with Sadhana. While Manva is tirelessly trying to get them closer, Rajveer remains reluctant to welcome his mother back into his life.

This complex situation puts Manva and Rajveer in two different teams and threatens to separate them yet again. Sadhana is already apologetic towards Rajveer for her behaviour and Manva is asking him to try to emphasise with his mother’s situation. In this difficult scenario, only time will tell if Rajveer is ready to forgive Sadhana for her mistakes. Until then, we would love to know whose side are you on? Tell us your opinion in the comments section!

Nude: 5 Best Scenes From Kalyanee Mulay And Chhaya Kadam's Film That Are Applaud-Worthy!