The actress proved to us that she is a far cry from her villainous onscreen character. Pics inside! 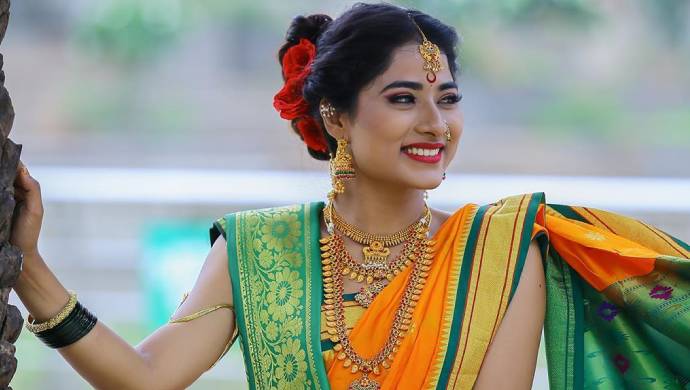 If you have been anywhere close to Tu Ashi Jawali Raha recently, then, you would know the dramatic twist the show has taken. Along with Manva, the focus now has shifted to Alaknanda. After spotting Alaknanda with her boyfriend, Rajveer tried to force her to get married.  He introduced her to his colleague’s son, Aniket. However, this plan backfired as Alaknanda created misunderstandings between the two families and broke the proposal. Through all this, her reluctance to get married was evident to the audience. However, dramatically contrasting her onscreen character, Amruta Malwadkar’s readiness to get married was seen on her social media platform as sported the bridal look.

The avid fans of Tu Ashi Jawali Raha have seen Alaknanda’s planning and plotting that she had done to stop her marriage from happening with a gentleman like Aniket. She pulled Manva in her plan and conveniently pushed the blame on her. But, if you think Alaknanda is the same in real life then you are absolutely wrong. The Tu Ashi Jawali Raha showed us she would make an excellent bride as she dawned the Marathmoli bridal trousseau. Along with the typical nauvari, Amruta even opted for a shela which gives an overall royal look.

The actress accessorised the whole look with heavy necklaces amongst which the rani haar is our favourite. To go with this, Amruta finished the whole look with bun hairstyle which was adorned with two red roses that complimented her yellow saree. This transformation was a shocker since, in the show, Amruta is seen opting for western attires.

After looking at Amruta, are you just impressed as us? Do let us know in the comment section if you think Amruta will make a beautiful bride on and off the screen.

The Cast Of Tu Ashi Jawali Raha Shares The Best Friendship Even Off The Screen!

Saajana: Want To Know What Pratap And Rama's Bond Looks Like In Real Life? Pic Inside!