Tu Ashi Jawali Raha’s Manva And Her Family Celebrated The End Of Serial On ‘Sweet’ Note!

The actors didn't forget to click pictures and celebrate this moment. 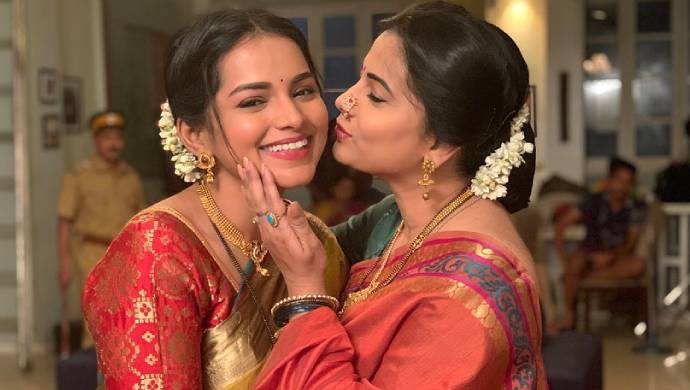 Most of you must be sad that two of your favourite shows, Phulpakhru and Tu Ashi Jawali Raha, got over one after another. However, the actors of the show seem to be happy to have ended one memorable journey. (Afterall, all good things must come to an end, right?) On this ocassion, Titeeksha Tawde, who essays Manva in Tu Ashi Jawali Raha, had a special way of celebrating the ending on the sets of the show. Are you curious to know what the actress did on the last day of the shoot? Stay tuned.

Before you proceed, watch an episode of Tu Ashi Jawali below:

Tu Ashi Jawali Raha had a phenomenal run during its time on Zee Yuva. Every episode was oozing of delicious drama due to which the serial continuously garnered fame. While playing their roles, the actors were sharing a bittersweet relationship in reel life. However, that is not the case when it came to reality. Titeeksha shared a picture alongside Sulekha Talwalkar and Milind Gawali, who essayed the role of her parents on the screen. You see these actors sharing a kulfi on the last day of the shoot. The only person missing is Titeeksha’s onscreen brother played by Niranjan Kulkarni. As the shooting wrapped up, the actress happily clicked pictures to document her memories with the Tu Ashi Jawali Raha family.

This picture made us realise how much we are going to miss watching the show. But, it feels good to know that this show will always be available on ZEE5. We would love to know in the comments, your favourite moments from the show.

Traits That Make The Characters Of Sex Drugs & Theatre, Refreshing And…

Ditch Your Regular Blouses And Try These Styles Inspired By Priya Bapat, Sai…

Meanwhile, continue watching the before TV clips of your favourite Marathi shows streaming free on ZEE5.

Phulpakhru's Final Song Might Just Make You Emotional! Video Inside