The Tuzhat Jeev Rangala actress impresses us with her dance moves! 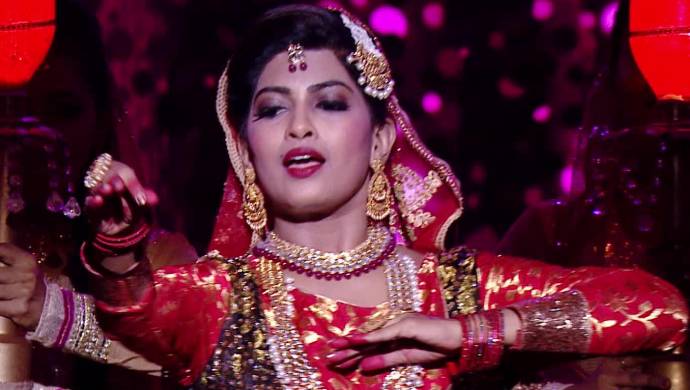 You’ve heard us rave about Zee Yuva’s new dance reality show called ‘Yuva Dancing Queen‘. Until now, we have witnessed contestants, from various career backgrounds, show their dance moves on this platform. Seeing their impressive prowess in dancing, we have cheered for them during their performances. Recently, once such performance which truly stole the show was Dhanashri Kadgaonkar‘s! The Tuzhat Jeev Rangala actress earned compliments for her act which took the judges back in time. Let’s revisit the performance!

Watch an episode of Dancing Queen below:

Dhanashri stole the show with her acting skills in Tuzhat Jeev Rangala on Zee Marathi. Even in the negative shade, the actress made her character stand out onscreen and won appraisal for her hard work. After her stint in the Marathi serial ended on a high note, she decided to impress us yet again in a slightly different way. Dhanashri participated in Yuva Dancing Queen and, till today, continues to deliver powerful performances. In the recent episode, she performed on the famous song, In Aankhon Ki Masti from Umrao Jaan. Witnessing Dhanashri’s act the judges couldn’t stop gushing about her moves. Sonalee Kulkarni, especially, didn’t hold back while comparing Dhanashri to the legendary actress Rekha who was originally seen in the song.

In real life, too, Dhanashri is a trained Bharatnatyam dancer. The actress has often taken social media to profess her love for this art form while posting videos of herself dancing. After reading this, don’t forget to share your thoughts about Dhanashri’s performance in the comments below!

Saajana: Will Pratap Come To Know Hari Is Ankush’s Spy?

Almost Sufal Sampoorna: Here's Why Appa Should Allow The Ketkars To Launch Their Products

Prem Poison Panga: Will Gandhar And Prajakta Get A Hint Of Jui's Secret?