The team of Dhurala, spent time with the contestants of Yuva Dancing Queen. Check out the video inside to know what we are talking about. 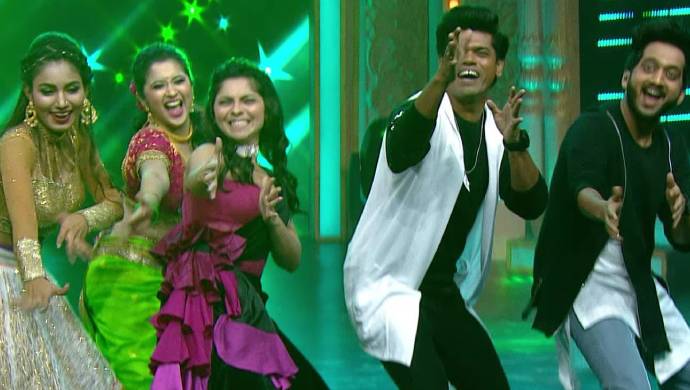 Our expectations are always set high, thanks to the super entertaining content found on Yuva Dancing Queen. Every new episode of the reality show hosts guests, who come to judge the contestants’ performances. Last week, Amey Wagh, Siddharth Jadhav, Ankush Chaudhari and Sai Tamhankar, made an appearance on the show,  to promote their movie Dhurala, and thoroughly amused us with their sense of humour. Amey and Siddharth didn’t hold back while performing a singing duet with Purva Shinde, which won loud cheers from the viewers and the judges.  Are you curious to see a glimpse of the latest episode? Let’s have a look!

Ankush and Sai enjoyed the company of the contestants as their co-stars Amey and Siddharth, took to the stage and vowed the audience with their act. The Dhurala actors and Purva, went up against each other and flaunted their moves, upon the judges’ request. Sonalee Kulkarni and Mayur Vaidya were seated on the judging panel and consistently showed their support, by applauding them through this brief performance. Soon, the trio was joined by the other contestants on the dance floor, which was lit up with bright lights. Check out the video below.

We bet you must have tried raising your eyebrows, like Purva and Amey,  in the video above. It is always fun to watch the other side of the actors, which rarely gets captured when they are playing their characters, in their respective shows.  If you wish to keep witnessing more such fun moments, then don’t forget to tune into Yuva Dancing Queen, from Wednesday to Friday, at 9.30 pm, streaming free on ZEE5.

Saajana: Is Rama Going To Break Up With Pratap?